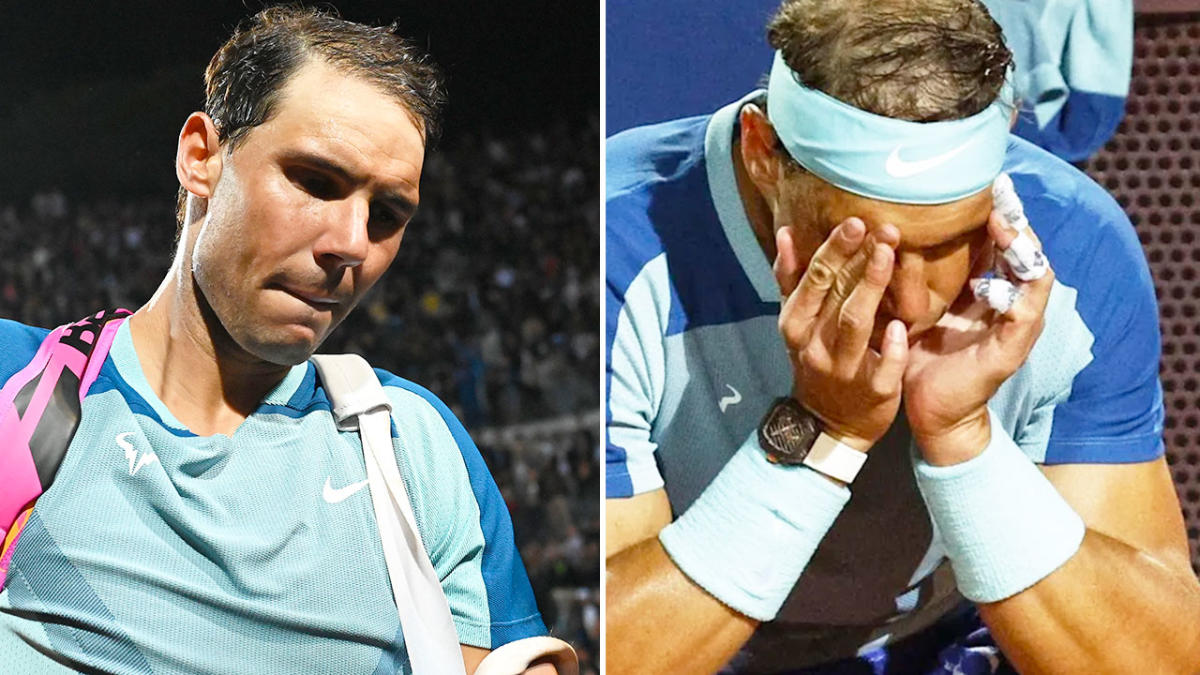 Rafael Nadal’s French Open hopes appear to be hanging by a thread after the Spaniard injured a foot in his third-round loss to Denis Shapovalov at the Italian Open.

The 21-time grand slam champion was in obvious discomfort as he was bundled out of the clay court tournament by the Canadian, 1-6 7-5 6-2.

At one point, the 35-year-old walked over and leaned on his towel box and grimaced in pain. He also limped between points.

They were particularly concerning scenes for Nadal and his legion of fans, especially with the Spaniard’s favorite grand slam beginning at Roland Garros in just 10 days.

Nadal missed a large portion of last year with a left foot injury.

“I hurt my foot again with a lot of pain,” Nadal revealed after the match.

“I’m a player living with an injury. It’s nothing new. It’s something that is there, unfortunately. Day by day is difficult.

“Lots of days I can’t practice with the proper way again.”

Nadal returned to the tour last week following a rib stress fracture that kept him out for six weeks after a blistering start to the year that included his record 21st grand slam title at the Australian Open.

Nadal was also beaten by 19-year-old Carlos Alcaraz in the quarterfinals of last week’s Madrid Open.

Fans were gutted watching Nadal battle through obvious pain against Shapovalov, with many fearing what ramifications his latest injury might have.

Earlier, Novak Djokovic ended Stan Wawrinka’s hopes of stringing together a hat-trick of match wins for the first time in 18 months with a 6-2 6-2 thumping in the last 16.

The 37-year-old Swiss, who hadn’t played for 12 months after undergoing two surgeries for a foot injury, battled past Reilly Opelka and Laslo Djere to set up a 26th meeting with top seed Djokovic in the Italian capital, and first since 2019.

But the 361st ranked Wawrinka, who last won three successive matches at the 2020 Paris Masters, could not cope with Djokovic’s baseline intensity in the first set of Thursday’s clash at the Foro Italico and was broken twice.

Wawrinka showed incredible defense to break Djokovic in the sixth game of the second set but a double break from the world No.1 carried him to victory.

It was Djokovic’s 20th win over Wawrinka – and 998th career victory – as he bids to become the fifth player to reach the 1000-win mark.

“It is great to see Stan back,” the Serbian said. “He won two matches here, he is still physically not there, but he is still Stan and can hurt you.

“From the beginning, I really moved him around the court and held my serve well. I know what is expected from me next.”

The World No.1 Djokovic will face Canadian Felix Auger-Aliassime in the quarter-finals after the 21-year-old beat American Marcos Giron 6-3 6-2.

Alexander Zverev chalked up a century of match wins at Masters 1000 events with his 6-3 7-6 (7-5) win over Australian No.1 Alex de Minaur, while world No.5 Stefanos Tsitsipas battled back from a set down to beat Russian Karen Khachanov 4-6 6-0 6-3.

Click here to sign up to our newsletter for all the latest and breaking stories from Australia and around the world.