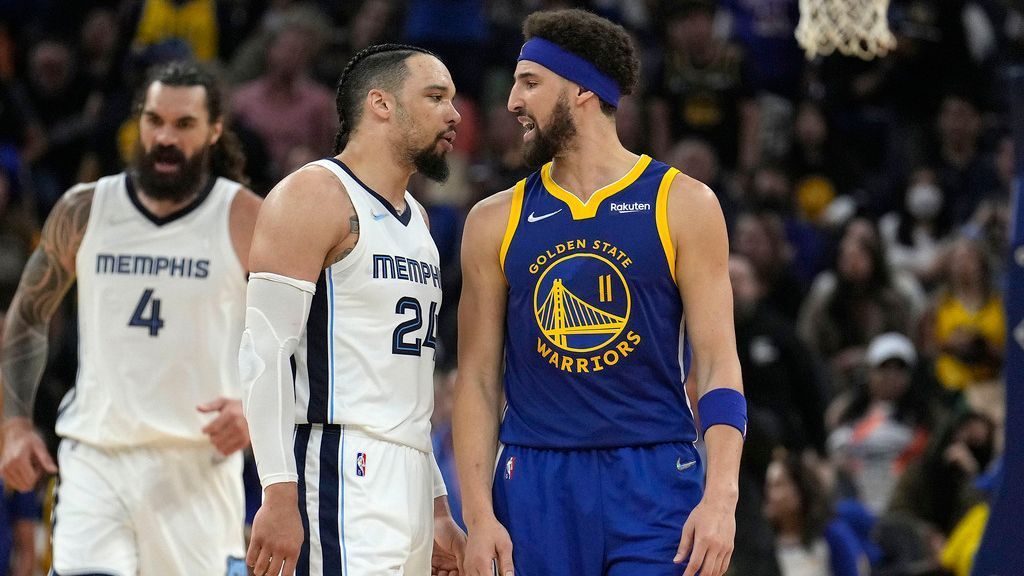 SAN FRANCISCO — After Memphis bowed out of the NBA playoffs with a 110-96 loss to Golden State in Game 6 of their conference semifinals series Friday, Memphis forward Dillon Brooks said the Grizzlies are hot on the trail of the Warriors.

“We’re young, and they’re getting old,” Brooks said. “They know that we are going to come every single year.”

Brooks, 26, is the eldest of the Grizzlies’ top eight scorers this season, during which the upstart Memphis squad won 56 games and finished with the West’s No. 2 seed.

After seven consecutive postseason appearances during the 2010s with their “Grit ‘n’ Grind” squad, the Grizzlies began to rebuild in 2018 around a younger core. Over the past four drafts, Memphis has added Ja Morant, Jaren Jackson Jr., Desmond Bane and Brandon Clarke to a roster that included Brooks.

The Grizzlies lost Morant, their star third-year point guard, following their Game 3 loss to the Warriors after he suffered a bone bruise at his right knee. The Grizzlies responded valiantly, leading the Warriors at Chase Center for most of Game 4 then thrashing them in Game 5 at Memphis, when they led by as many as 55 points and won by 39.

“A hundred percent,” Brooks said when asked if Morant’s presence might have changed the outcomes of Game 4 or 6. “Ja is one of the best point guards in this league — you guys know that — obviously it would change, but we made do with what we had.”

On Friday, Memphis fought Golden State neck-and-neck until the game’s closing minutes, when a late shooting spurt by the Warriors vaulted them to the 14-point victory.

“This is good motivation, good learning, playing against two of the best shooters in history,” Brooks said. “Going against them was an amazing feeling. It’s big for us, and we’re going to take this throughout the summer and be ready to do it again.”

Brooks, who pummeled an Airborne Warriors guard Gary Payton II en route to the basket in the opening minutes of Game 2, became an instant villain in the Bay Area. Payton suffered a fractured left elbow on the play, while Brooks was assessed a flagrant foul 2, ejected from the game and suspended for Game 3 in San Francisco. When he returned to action, Brooks was booed heartily by the Chase Center crowd each time he touched the ball.

Despite the chippiness, which continued through Game 6 as Brooks and Warriors guard Klay Thompson jawed at each other constantly, Brooks and his Grizzlies teammates congratulated the victorious Warriors after the final buzzer. Following the game, Warriors guard Stephen Curry praised the Grizzlies’ young talent and ability to contend in the coming seasons.

“I have a lot of respect for every single guy on the team in terms of how they are built as a group, the individual talent,” Curry said. “They have a lot of energy, a lot of potential in terms of winning at the highest level. They were the higher seed for a reason. They had an amazing regular season and dominated throughout the course of those 82 games. For us to be able to come out of the series with a W, like there’s definitely respect. There’s definitely an understanding that they made us better; I’m sure we made them better.”

Curry and Morant have established a mutual admiration over the course of the series, with Curry lauding Morant’s maturity following Game 1 in Memphis. After the game, Morant tweeted that the Warriors were his “fav matchup” and that he was “looking forward to more battles 30,” referencing Curry’s jersey number.

“His numbers are crazy,” Curry said. “The sky’s the limit. Like I said, they are going to be around for a long time, fighting for Western Conference progress. So we’ll enjoy this and keep moving toward our goal, but you have to understand that they are going to be around for the long haul and he’s a problem. So definitely an amazing matchup, fun, entertaining, high-level basketball, all the antics and pettiness and all that stuff, I love all of it.”